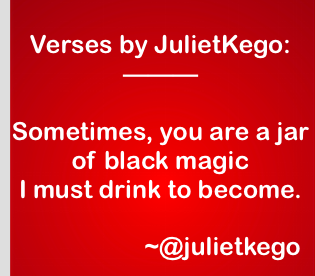 Sometimes, you are a jar
of black magic
I must drink to become.

Today, I challenge you to write a lune. This is a sort of English-language haiku. While the haiku is a three-line poem with a 5-7-5 syllable count, the lune is a three-line poem with a 5-3-5 syllable count. There’s also a variant based on word-count, instead of syllable count, where the poem still has three lines, but the first line has five words, the second line has three words, and the third line has five words again. Either kind will do, and you can write a one-lune poem, or write a poem consisting of multiple stanzas of lunes. Happy writing! ~Source: NaPoWriMo.net